This may sound odd to say, but I'm grateful for the past four years. Not happy, grateful.

Admittedly, the "emperor" is a genius at sucking the air out of any room and sloppily grafting himself onto one's mental and emotional space (icky enough to want to psychically shower every day). The economic construct we live in made it easy for him to manipulate the media for his benefit and our detriment. Bad news especially sells!

He had years of practice in New York amidst its false glamour as well as guidance and support by nefarious surrogates, at home and internationally, prior to overreaching for the throne. And during these past four years, there were ample numbers of congressional 'Renfields' (men AND women) complicit in maintaining the illusion, satisfied to feast on their token insect and rat blood meals of misplaced loyalty.

However, the heat of Truth has sufficiently begun melting his pan-cake coverage of alternate facts. Ultimately, the pendulum must swing in the opposite direction from any extreme trajectory. That's not fake news. And although his shenanigans continue and their reverberations will persist long after he's gone, someday he'll be buried in some cemetery that no one visits and his name will no longer be a licensing instrument, but rather just a research footnote about failed narcissistic bullies.

I'm grateful that he and his ilk have laid completely bare the blatant and wretched pathology of the heart and Spirit that is endemic to the past and current history of America. It is not only the "emperor" that has no clothes, America stands stark naked, too, reconstruction scars and careless implants plainly visible. More importantly, the more I sit in quiet meditation, the more clear it becomes that these inequities have their root in spiritual vacuity, not in personality.

So, I continue to sit each morning and I appreciate that you are sitting, too. Day 42 with 58 remaining in this 100-Dat Practice!

It's been sixteen days since my previous post and we're now thirty days into our daily practice of sitting and moving. It is said that it takes about twenty-eight days to establish a new habit. Hopefully, you're now feeling more enthused to exercise your daily sitting devotion and much less reluctant to stop.

At about 5:00am EST tomorrow morning, the winter solstice will occur and the winter season officially begins! The naturally contractive energies of this season are ideal for sitting meditation and to explore your inner Self. 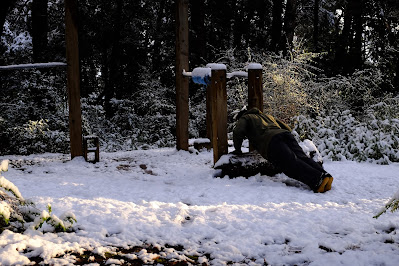 Part of the process now is to settle in becoming the observer of the experience without expectation, judgment. Just continued faith each of the remaining seventy days in this 100-Day Practice!
Blessings,
To be great, get it done!
Posted by Notes from the Yin Side... at 6:00 PM No comments:

If you find yourself doubting the benefits of sitting every day at 5:00am or perhaps you're rationalizing that missing just one day won't make any real difference over the span of 100, welcome to the oh so typical "commitment remorse" period. This quite common sense of doubt and regret about your resolution to create a new and beneficial habit is really an opportunity in disguise.

It's been my personal and vicarious experience that sometime between the 14th and 21st days of a new endeavor a rebellious toddler energy is evoked that disdains change. This "toddler" energy is comfortable with things as they are and fights tooth and nail to maintain the status quo. This is the opportunity for the burgeoning adult spirit within us to step in. The evolving adult within us needs to gently and firmly coax the toddler to do it in spite of the seeming inanity or discomfort of it all at the moment.

Within another 7-10 days, those rebellious sentiments seem to wither and fade away and a growing sense of freedom to choose and act in our self-interest bursts forth. This is the energy we embrace and which then propels us forward to complete the task.

Sit and enjoy your process...

First chapter: Yang Family Style Taijiquan
Blessings!
"To be great, get it done!"
Posted by Notes from the Yin Side... at 1:30 PM No comments:

To be great, get it done!

This morning's session was punctuated by the sound of the rain's pitter patter on the AC in the window. My right knee was more reluctant than usual to participate in sitting. I massaged it a little longer this time and it was fine. Generally, I was more aware of my body being less comfortable than I typically am. That made for distraction from my internal focus for sometime. Eventually, I settled in...

As a courtesy, I am posting the following quote for Mr. Jamal Ashanti Bey who is participating in the 100-Day Practice!: "It is better to move less than more; it is better to not move than to move less; moving while being immobile is the movement of creation."   -Master Wang Xiangzhai

The time sitting and moving seemed to pass by more quickly than usual this morning. Perhaps the recent energies of the Lunar eclipse and Beaver moon were contributing factors in my experience yesterday and today? We are made of the stuff of celestial bodies and are a part of Nature. Though subtle, it stands to reason we are affected in some manner; especially when in a meditative state.

I was feeling pretty tired last night and had doubts about waking up at 5:00am this morning to sit in meditation. I was rationalizing and negotiating with myself to feel okay with not doing the practice. What would it matter if I missed just one day out of 100; especially since I've been doing this kind of thing since 1985? And, anyway, no one would know if I did it or not. On and on my mind wandered...

It wasn't until I walked by our meditation room that my true Self emerged to take the reins and keep me on track. This is the Self that emerged over the years as a result of the investment I've made in trials and tribulations learning to be disciplined, tenacious, and diligent. It's the part of me that doesn't let me fail or fall without getting back up to continue my journey.

What I've learned is that it's okay to not want to do a practice. Those feelings are rather normal when you choose to be at your best committed to a goal. What matters is whether or not you succumb to the feeling.

It's my belief that success must be earned and, therefore, that process is intrinsically challenging to help cultivate the muscles of character required to achieve one's aims. Thus, what truly matters is what you actually do; especially when no one knows you're doing it and you are not going to be complimented for doing it. In the darkness of the enclosed chrysalis, a caterpillar transforms itself into a butterfly that must struggle and break through to emerge to fly!

As I walked by the meditation room, I stopped, entered the room and setup my seating space. I then got my clock and set the alarm for 5:00am. I heard it ringing way off in the distance this morning and my Self got me up out of my comfortable bed to go sit. One day closer to achieving my goal. No epiphanies this morning, no glorious revelations. However, it is a powerful link built in to the chain of constancy...

I spent my movement time (about 45 minutes) massaging my toes, feet, ankles, knees, groin and hips. Feel so much freer in my gait and standing...

Notes from the Yin Side...
Yin Side Notes explores my ongoing experience studying, training, and practicing the disciplines of Qigong and Taijiquan. As I strive to understand the relationship between strength and power, the threshold and harmony between what is seen and its hidden source, and the intersection between the ephemeral and the material, I will share my journey. Join me if this interests you!